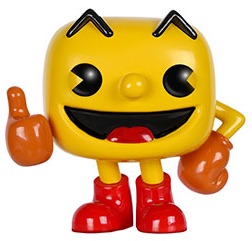 The announcement of a new series of Funko Pops has generated a wave of excitement among the players of video games. Funko has announced the release of vinyl figures of classic video game character Pac-Man that was popular among video game players of 1980s. Brief information about Funko and its upcoming Funko Pop figures provided in this write-up will help you to know more in this regard.

Recently Funko has announced the introduction a collection of vinyl figures of Pac-Man, the video game icon of 1980s, as its latest Funko Pop figures. Funko is planning to produce not only Pac-Man but also his better half and ghostly adversaries, which are expected to be released in 2016 March. Though these characters will have legs and arms to look human, their box art and classic logo differentiate them. Pac-man, Ms. Pac-man, Inky, Blinky, Clyde, Blue Ghost and Pinky are the seven characters that complete this series of vinyl figures of Funko Pop toys.

According to recent Funko Pop news, the company has planned to introduce an arcade of classic characters in the game rooms of their customers in order to provide them with something new. They have introduced Pac-Man in its new series of vinyl toys as it emerged as a successful new arcade game in 1980. The principle of this video game was simple where users had to navigate a network to let Pac-Man or Ms. Pac-Man try to eat the dots whereas the ghosts were to be avoided. Though the game is outdated these days but the legacy of its iconic characters still continues.

According to Mariotti, the forthcoming collection of Funko Pop figures of Pac-man, to be introduced in March 2016, will definitely attract the admirers of vinyl toys as well as the Pac-Man and his allies. They will definitely love to see a 3 inch tall line of stylish vinyl figures of video game heroes from the 1980s, Pac-Man, along with his ally Ms. Pac Man and his persistent enemies Inky, Blinky, Clyde, Pinky as well as a Blue Ghost in their game room.

Check out some more